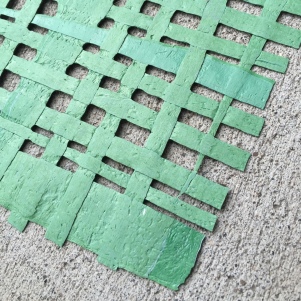 This morning I wove a small placemat from fused plastic bags. But I did not originally set out to make a woven mat. That is the beauty of being open during the creative process. I recently saw some giant pinwheels in a store. As I often do, I thought Hmmm, I bet I could make some of those. My plan was to create a large plastic sheet by fusing grocery bags. But the particular plastic I was using proved to be very difficult to fuse evenly. And the final sheet was not large enough to make a splendidly giant pinwheel. So I trimmed the uneven edges and considered what else I could make with a long rectangle plastic sheet. The trimmings were lined up on the counter and suddenly I had a flash of inspiration. I cut the rectangle into strips, wove all the pieces together, and ironed (fused) the final composition. I love it when mistakes or failed attempts become successes.